Have you ever wondered how hackers extract sensitive information from a website? Again, if they do so, what methods do hackers use to get hold of your confidential data, such as credit card numbers and pins? Well, they use attacks known as SQL injections or Structure Query Language Injections. This blog tries to shed more light on:

What are SQL Injections?

SQL injection is a web technique used to inject harmful codes into SQL queries. It is a technique that makes it possible for internet hackers to get access to other people’s sensitive and confidential information without their knowledge. Hackers discovered SQL injection in 1998 and up to date, SQL remains the most effective attack technique as far as the database is concerned. Before SQL injections were discovered, website developers had a peaceful time because there were no things like JavaScript, CSS, and other complicated tools used to design the web. As the web gained popularity, developers needed more complex technological tools to develop more dynamic websites. As a result, CGI and query languages such as ASP, PHP, GraphQL, and others were discovered. This discovery made it easier for websites to store user input and content in the databases. Since then, every server-side scripting language has adopted SQL for additional support. With time, hackers learned SQL could be manipulated and therefore launched SQL injections, tools that attach a malicious SQL query to the original query intended to be run by the web application. From here, the SQL injection vulnerability became one of the most dangerous attacks on data integrity and confidentiality. SQL injection is the reason behind the hacking of big companies like Yahoo, Sony Pictures, Target, LinkedIn, and many others a few years ago. According to statistics, between 2017-and 2019, around 65.1% of attacks on all software in the world were SQL injections only. As technology advances, these hackers are becoming smarter and can operate anonymously without being detected, hence causing more damage. Their activities can lead to:

SQL injections can be exploited in various ways, depending on the complexity of the database and the hacker experience. Having various methods of data exploitation makes it difficult for a business to notice when malicious attacks are happening and this gives hackers time to achieve their destructive goals. Most methods involve executing commands from the main server, retrieving data based on errors, or just altering the query language logic to manipulate the entire data system. Here are the top 5 common types of SQL injections.

This is the most common type of SQL injection that any hacker uses to manipulate the servers. Hackers who use this type of injection usually begin by extracting all the data from the database. They use UNION SQL Operator to extend the results from the original query and then merge two query statements into a single unit, which they send out as a part of the response.

This is more complex to perform compared to other types of injections. We also know it as an inferential injection. Blind SQL injection never exposes data directly from the targeted source. Hackers mostly rely on generic error messages received from the target person or servers. This injection type can receive data directly from the database, and this allows hackers to query the same server for false or true questions. The response the server gives is then used by the hackers to determine the accurate answer they are looking for. This is how they can easily switch bank accounts and empty people’s money.

This type of injection also works closely with Blind SQL injections. Manipulators use it to trick the database into giving correct information. Hackers use authentication queries to send hundreds of requests and each has a slight difference from the rest. Based on the results the database will give, hackers analyze it to get accurate data stored.

This infection type is like Boolean-Based and works by sending queries to the database and giving it a specific time to respond. This is a difficult SQL injection type to implement as it requires attackers to analyze every character of the feedback it receives from the server, which is time-consuming as well. Smart hackers can use it in combination with Blind SQL injection as well to steal tons of confidential data from the database. Once data is retrieved a hacker can even erase or destroy the entire data system, pushing companies to huge losses.

How To Avoid SQL Injections

There are various ways in which an individual, institution, or business can avoid SQL injections. Each method depends on the amount of data stored within a server. The methods explained below have proven to be effective when used well, and they include:

The first stage of preventing SQL injections attack is by creating awareness about it. This begins by letting all your employees across all departments understand the dangers technology poses to your company. What follows is proper training on various aspects of SQL injections and how they are applied. Great companies may not train all employees, but key security players such as developers, DevOps, System Admins, etc, must be taught how SQL is created, how it works, and how to detect, prevent and counteract its effects. Again, training should be very often as new apps and websites come into the market. Why? This will keep your workers updated on the latest SQL injection techniques used by hackers, hence keeping your company protected. Back in 2014, Russian hackers used SQL injections to steal over 1.2 billion passwords from approximately 420, 000 websites around the world. Most of the attacked people reported they didn’t have any information regarding SQL injections, which ended up causing them lots of money. In 2014, SQL injections were not well understood, and hence lacked awareness. If these people were aware of SQL injections, would they incur such losses? Of course not!

One of the major mistakes people make is trusting that all inputs are safe. This is not only dangerous but also puts your company at risk of running its reputation and customers once data is lost. Big companies such as Paypal and Amazon treat all inputs as untrusted and therefore scrutinize them. Analyzing these inputs enables security personnel to detect any form of malicious attack and stop it before it causes damage. The best way to achieve this is by trying your best to avoid the harmful characters that could cause harm. Also, verifying the data to ensure it matches with the expected data is a top security measure. Technology has also created software meant to analyze inputs before they go to the main server, to avoid compromising critical information. Examples of such software include CrowdStrike Falcon, SolarWinds Security Events Manager, etc.

Keep Databases To the Latest Version

Outdated databases pose an enormous risk of SQL injections. Why? Because it is difficult for such individuals to realize when information is being manipulated. The latest versions of databases prevent attackers from spotting already known or potential weaknesses. Upgrading your databases comes with the latest productivity tools and features for easier communication, data protection, and storage. It also keeps your data organized systematically for easier retrieval and enables your security personnel to detect when this data is disorganized by hackers. Again, older versions of databases lack SQL injections protection and this can make you an easy target. For example, if you are using a Hypertext Preprocessor (PHP) query language, choosing PHP Data Objects (PDO) is better than MySQL injection.

Prepared statements are tools or features used to execute SQL statements, but with high efficiency and more accuracy. One way in which attackers access information is by studying query statements. Statements that are not well-prepared accessories have an enormous risk with them and make it easier for hackers to analyze data stored on the servers. Having developers with no experience at your company also exposes you to multiple attacks as, most of the time, such developers don’t even realize the value of prepared statements. When pre[paring statements, the queries are defined beforehand, their characters, and how they are expected to perform. Because the prepared query already understands the type of data it’s dealing with, it’s very difficult to make a mistake or even be hacked. This system of prepared statements and parameterized queries locks data, making it available to authorized parties only. Even when username or passwords are not in line with queries, prepared statements avoid these characters that don’t match the original passwords, shielding you from SQL injections.

Today, there are approximately 19 million developers in the world. Again, approximately 7 million use SQL for data-related functions. By just looking at these numbers, it is accurate to say that the chances of attacks are very high. Out of 19 million developers, not all develop well-structured SQL. Also, some may not have received adequate information on how to create better SQLs, and therefore end up developing poor SQL. A weak SQL makes databases vulnerable and easily accessible by attackers. Adopting verified modern mechanisms to develop SQL gives you maximum security against SQL injections. These mechanisms usually have an in-built threat detection system that quickly analyses threats even before it reaches the database. If an attacker tries to hack your information, for example, this security system detects it and sends an alarm that there is malicious activity going on. Within seconds, it captures this threat and stops it from either erasing or stealing information, keeping you safe. How cool is that?

WAF is one of the best tools for preventing SQL injections. WAF helps protect websites and applications from malicious threats that could otherwise compromise sensitive data. Thomas Nagy developed WAF in the late 1990s, with an aim of filtering and monitoring threats before they could reach applications or websites. Once filtered, WAP blocks any detected and dangerous traffic by preventing any sensitive data from escaping the app or a website. This means that if a hacker wants to have confidential data out of the website or an app, he/she cannot achieve that, as the system permanently encloses this information in such a way that it only remains in the intended place. Often, WAF is confused with standard Firewall, although the two tools work differently. A standard firewall acts as a barrier between external and internal websites or application networks. A Firewall follows specific instructions created by you, which dictate whom you can talk to and whom to avoid. Adopting such a tool is key because it automatically shows you the threats so that you can avoid them, and it’s difficult to hack.

SQL injection is a malicious activity carried out by hackers to steal, delete, or alter confidential data. SQL injections discovery was after the invention of SQL standardized programming language. Since then, these injections have accessed tons of data from people, pushing them into huge losses. For almost one decade, SQL injections were almost undetectable because it took developers a long time before realizing how they operate. Today, it is possible to prevent these SQL injections using simple tools like CrowdStrike Falcon to scan all inputs before accepting them into the database. Also, developers have empathized with the use of prepared statements, using updated databases to store information, adopting verified mechanisms, and many other ways for data security. There is no way SQL injections can stop because hackers keep on getting smarter. However, taking proper precautions can be the first step towards achieving security freedom. 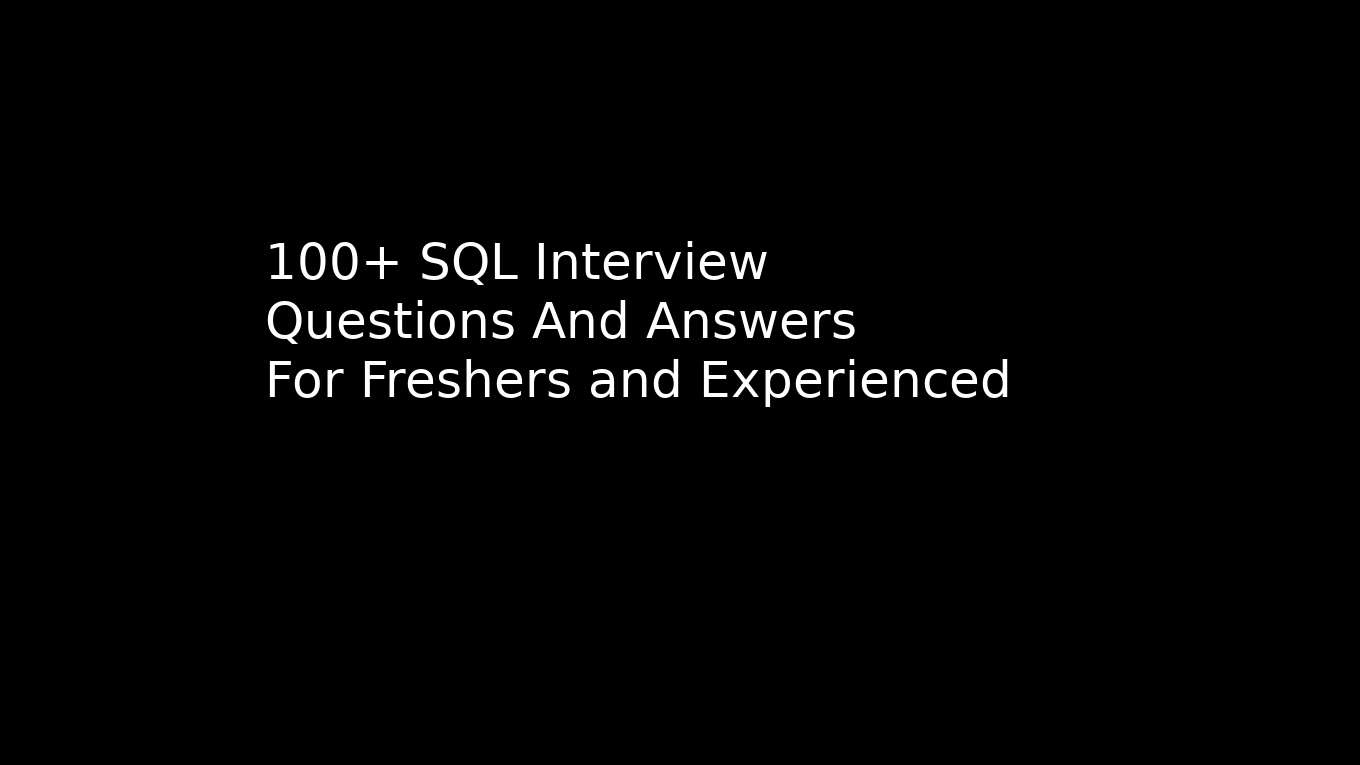